Repairing a family’s home in time for the holidays!

When DRS was called in to mitigate the loss caused by multiple Ice Dams, DRS discovered that 7 of the rooms were affected by the water damage. The rooms affected were the kitchen, living room, half-bath, 2 bedrooms, the full bath, and the finished basement.

After performing the mitigation process, DRS went on to do the rebuild. For the rebuild, DRS re-insulated all of the affected rooms, removed two skylights from the living room, and replaced the entire roof. From there, DRS installed new sheetrock, removed the swirl pattern from the ceilings by skim coating them, and installed vinyl flooring in the bathrooms and the kitchen. The living room and one bedroom had new carpets installed and every room was re-painted. The upstairs bathroom was completely converted, by blowing out the closet of the room behind it and installing a new shower there, along with a Kerdi waterproof system and new tile. DRS replaced all of the trim around all windows and doors, replaced the drop ceiling in the basement, and installed finished fluted columns in the kitchen and dining room.

Challenges with the project: The original kitchen cabinets were very high end and had to be stored in climate controlled storage and re-assembled to the exact inch for the granite counter top to get reinstalled. Four large beams in the living room needed to be carefully removed, stored, re-installed and stained. 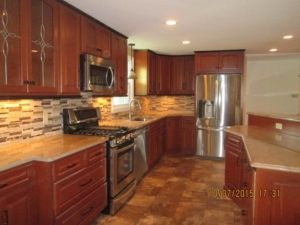 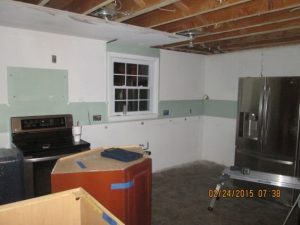 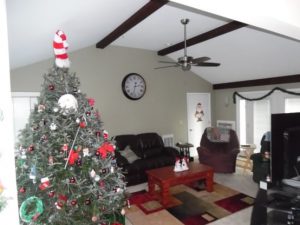 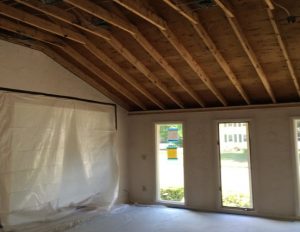